I think we can all relate to this article, published recently on AutoExpress. Living in the Fens means as soon as we venture outside our towns and villages we see the effects of subsidence or heavy vehicle use on roads we traverse regularly.

The Wisbech Standard seems to often feature stories re. the state of our roads, 2020 had two ‘worst’ contenders: Folly’s Drove and Stocking Drove, whereas in 2021 it was Cant’s Drove – until it was re-surfaced! I wonder what 2022’s will be. My current vote is for a lesser used stretch of road that connects the small hamlet (or village, depending on where you look) of Turves to the A605.

Whilst the overall solution to the problem is likely beyond the scope of our individual powers, I can only suggest that, to help improve ride comfort in our daily lives, we all invest in a classic Citroën* (or even a Rolls-Royce Silver Shadow, if feeling flush). Citroën’s hydro-pneumatic suspension really comes into its own in the Fens – I love driving my 1990 BX St. Tropez as my local ‘daily drive’, whereas my father would say a DS remains unparallelled for comfort. A good friend and Citroën specialist swears it is the Ami that surpasses them both, but I’m yet to experience the proof.

If you’d like to read a little more about the ‘magic carpet ride’ development, this very in depth article on Citroënët should provide all the answers!

*Disclaimer: The author of this article may be slightly biased toward Citroëns.

From May 2018 vehicles manufactured before 1977 will become exempt from annual roadworthiness tests or MOT.

Madness or genius? Well I certainly have my own views, and I will be continuing to take my own cars for an MOT. Why? because it NEVER hurts to have someone else look over things. It also keeps the history of my car going, and proves the mileage is genuine, should I ever want to sell my car. Continued MOT history would certainly give me more confidence buying a car.

However, you may decide to take advantage of this new MOT exemption. If so, there are some things you need to know. Find out all the facts in this document produced by the government.

The club, supported by Elgoods Brewery, shared the money between good causes selected by club members. The money was raised through the club’s annual Road Run event, in August, which this year saw over 200 vehicles, from lorries to motorbikes, take part in the 80 mile run.

Club Chairman, Roger Salter, said, “As a club we are delighted to be able to give a little back to the local community.”

by Roger the Roving Rover Reporter
Our season opener was the Village Show at Marshland St. James the day before Drive-it-Day run. It was a little wet at times but enjoyable.
After Drive-it-Day we were off to Stradsett Park Vintage Rally, another great weekend.
At the Carrington Rally, May 28th-30th we were invited to put our display on at Lineside Vintage show in October. They were impressed with our set up even though we had been living in a ‘dust bowl’ for three days and our cars looked like barn finds and we all had brown hair and clothes.
Jim Read made us all very welcome again at Holbeach this year although some of us had to be towed in through the mud bath main entrance. It all cleared up over the weekend and getting out on Sunday was fine.
On 25th & 26th June we went to Steam on Rutland Water for the first time. This must be one of the finest venues we have ever been to. Parked up on the side of the lake, it was beautiful.
Off to North Norfolk Railway 2nd & 3rd July for their Vintage Transport Weekend at the back of Holt station. We put a display together with the Anglia Region Wolseley Register, it must have impressed the organisers as they have asked us all back again next year.
Saturday and Sunday vintage buses take you to Sherringham and back (hop on, hop off) and Sunday steam train rides the same. All free for exhibitors. Over 4oo vehicles there, and the compliments were non-stop.
At Parson Drove show 16th & 17th July, Roger Reader and his team gave us enough space to display 7 period/classic caravans and 23 classic cars. A huge thank you to them and all our club members who attended as our club display won Best Club Stand trophy and Fred Clarke won the trophy for Best Pre 5o’s Classic Car with his 1937 MG VA.

This year, and with the weather looking OK I felt it time to take part in the Classic Vehicle Parade. Last year a minor medical procedure precluded anything such as lifting. Actually, just a pacemaker. This was to be the 1st public outing for my 1951 BMW R25 motorcycle, ‘The Little Horror’, named in 1966 by my mother, who exclaimed that upon seeing the then £10/0/0 delivered purchase.

A short ride, around the town, but not without incident. The motorcycles were all under 250 ccs a BSA Bantam, Francis Barnet twin 2 stoke and my single cylinder BMW. Where were the big British bikes? I think the trikes made enough noise for us all.
Assembled in the grounds of the late Patsy Brewin’s gardens were a goodly number of cars, a van, Jackie and Roger Newark’s Bakers deliver vehicle. There were said to be a 100 vehicles, 3 motorcycles, 2 scooters and 5 trikes. Ray Howse had organised this, driving his very nice red 2cv Citroen engine Lomax. Leading the parade was the Wisbech Fire Engine, ‘Vivien’. 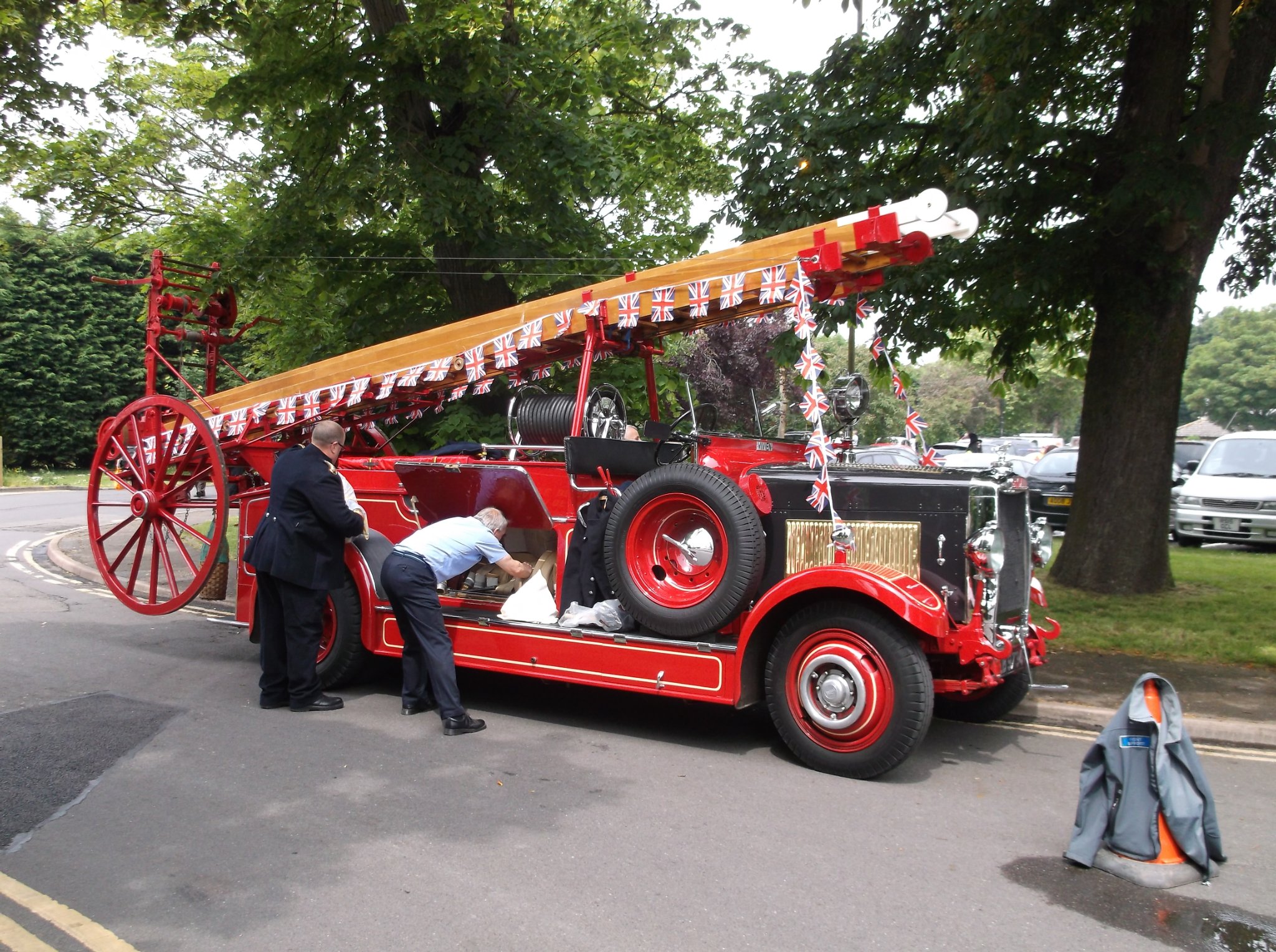 The route was High St, Broad St. T.L. into Dartford Rd, T.R. into Darthill Rd. Right again into Norwood Avenue, then again Station Rd, follow around to the High St once more. Eventually, right into Borrowmore Rd. and again Gaul Rd leading to the park.
Never actually saw the Fire Engine as is was so far ahead of us ‘tail end Charlies’, Motorcycles and trikes. I have been told by Ray that the Vivien driver was told to go slow, ‘so people can see the vehicles’. The result of this can be guessed. I feel I could have pushed the BMW round the route faster that we actually proceeded. In fact I did, for about 5 yards, just outside Spec Savers on the return.

Due to the so slow pace, in and out of neutral, the clutch became quite hot, and by expanding, I was unable to disengage the gearbox as we stopped at Town Bridge. Only answer was to stall the engine on the brakes, and then bump start, with a push for a Steward. Cheers from the crowd and away.

I was a lucky one! In Norwood Ave, a line of oil in the road appeared, which continued into Gaul Rd. At every halt in progress, the line became pools. Someone in a 4 wheeled vehicle had lost a sump bolt by the look of it.

Eventually I got into the Park, staying until about 3 pm, when the clouds looked black. As the BMW had not yet been out in the rain, it has only done 90 miles so far, I headed home to Creek Rd, just as the spots became a down poor.

Investigation next day, I had not adjusted the clutch correctly. Do keep in mind the design is really 1935. When BMW restarted production of Motorcycles in 1949, they used per war castings and parts, just too actually get things started. By 1954 all had been redesigned. The handlebar controls, dip switch, horn , and throttle are items that appeared on bikes in the mid 1930’s. The gear box still has hand and foot change.
Investigation to the bad starting when hot is down to the coil. The resin inside had started to melt. This is a ‘design’ feature on BMW’s, but only manifests it’s self after about 60 year use. All being well, I look forward to joining the Road Run on 14th August. 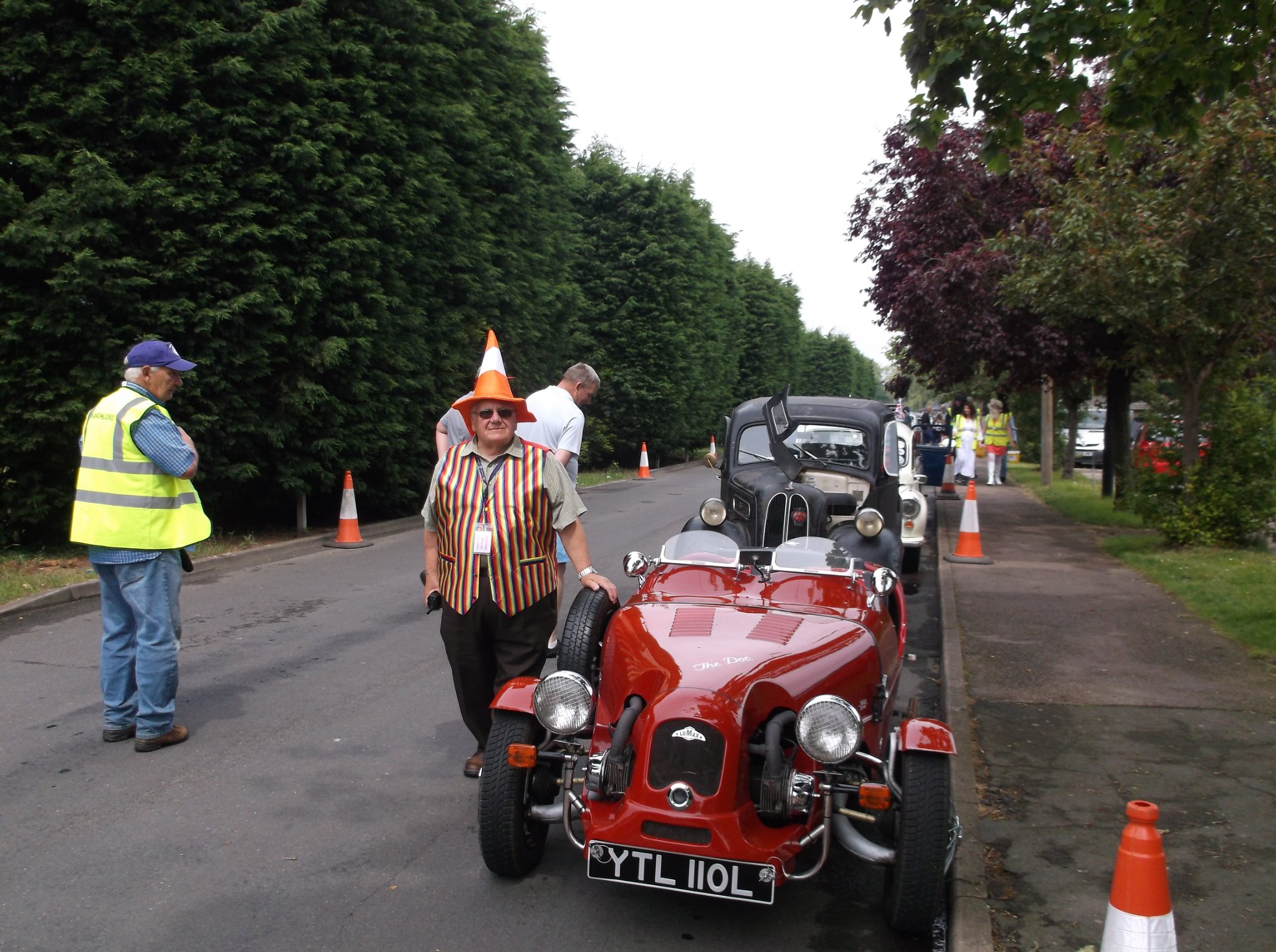 Ray Howes, organiser of the March Carnival car parade, with his Lomax (and dubious headgear!)

Thanks to all who attended in 2022. Keep checking back for a date and entry forms for 2023!